What is forehead augmentation? It means a fore head that is flat or has sunken is given volume through fat grafting or forehead implants. Yes, there are two types of procedure can be done. More information about it will be explained more later. Forehead contouring is not only focusing on the middle of the forehead but includes forehead, cheekbone, nose, and chin area as well. By removing forehead lines and forehead ridges through this face contouring procedure, you can appear younger than before. If small and recessed forehead usually gives off a manly appearance, with forehead augmentation, it will gives you an attractive appearance.

Now time for the explanation. What does it mean by fat grafting and forehead implants procedure? Both are meant to give a volume to the forehead, just the methods are kind of different. 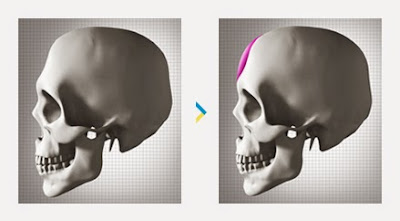 Fat grafting begins with gathering some fat of butt, thigh, or abdomen with a thin tube fter general anesthesia. Then the fat will be extracted, collecting a pure and good fat. It also gets rid of impurities with a centrifuge. Last, the fat will be inserted from 1cm behind hairline to near top of nose. It distibutes uniformly between bone of forehead and beneath layer of inner skin and sets a balanced volume to the face.

While forehead implants has a preoperative preparation which is modeling the implants is proceed a week before the day of surgery. It will incise 2-3cm behind the hairline which makes scar is visible after the operation. Last, the surgical site will be sutured and covered with a compressive bandage.

See the Korean face contouring before and after photos below!